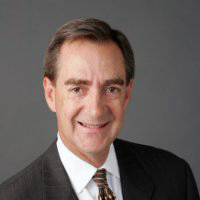 Terry Putney brings his unique experience in both the accounting and merger/acquisition disciplines to his role as CEO of Transition Advisors, a firm dedicated to working exclusively with accounting firms nationwide to:

Terry has over 39 years of experience as a practicing CPA, as managing partner of a large local CPA firm, as a partner leading M & A for a national accounting firm, as a corporate executive responsible for building and leading professional service strategies, and as a consultant to accounting firms of all sizes.

After leading five years of unprecedented growth as Managing Partner of Donnelly Meiners Jordan Kline in Kansas City, Terry negotiated the sale of the firm to form the foundation of HRB Business Services. He became the first president of this accounting firm consolidation strategy. The firm expanded to over 1,000 professionals in the first year through the acquisition of large local firms forming regional platforms. He led the transformation of HRB Business Services into RSM McGladrey after its acquisition of the non-attest assets of McGladrey & Pullen in 1999.

As Senior Managing Director-Mergers and Integrations of RSM he assisted in managing the growth of the firm through acquisition to its current position as the fifth largest accounting firm in the United States. Terry then successfully launched a pilot program to offer accounting and tax services under an alternative branding strategy as Vice-president of the Small Business Resources division of a Fortune 500 professional services firm in 2002.

Terry fulfilled a personal goal to return to his first passion, consulting, and bring the knowledge and personal experience he gained firsthand back to the accounting industry when in 2004, he joined forces with Joel Sinkin to form Transition Advisors.